The Tale of a Trail – A Potted History of Around Hermitage 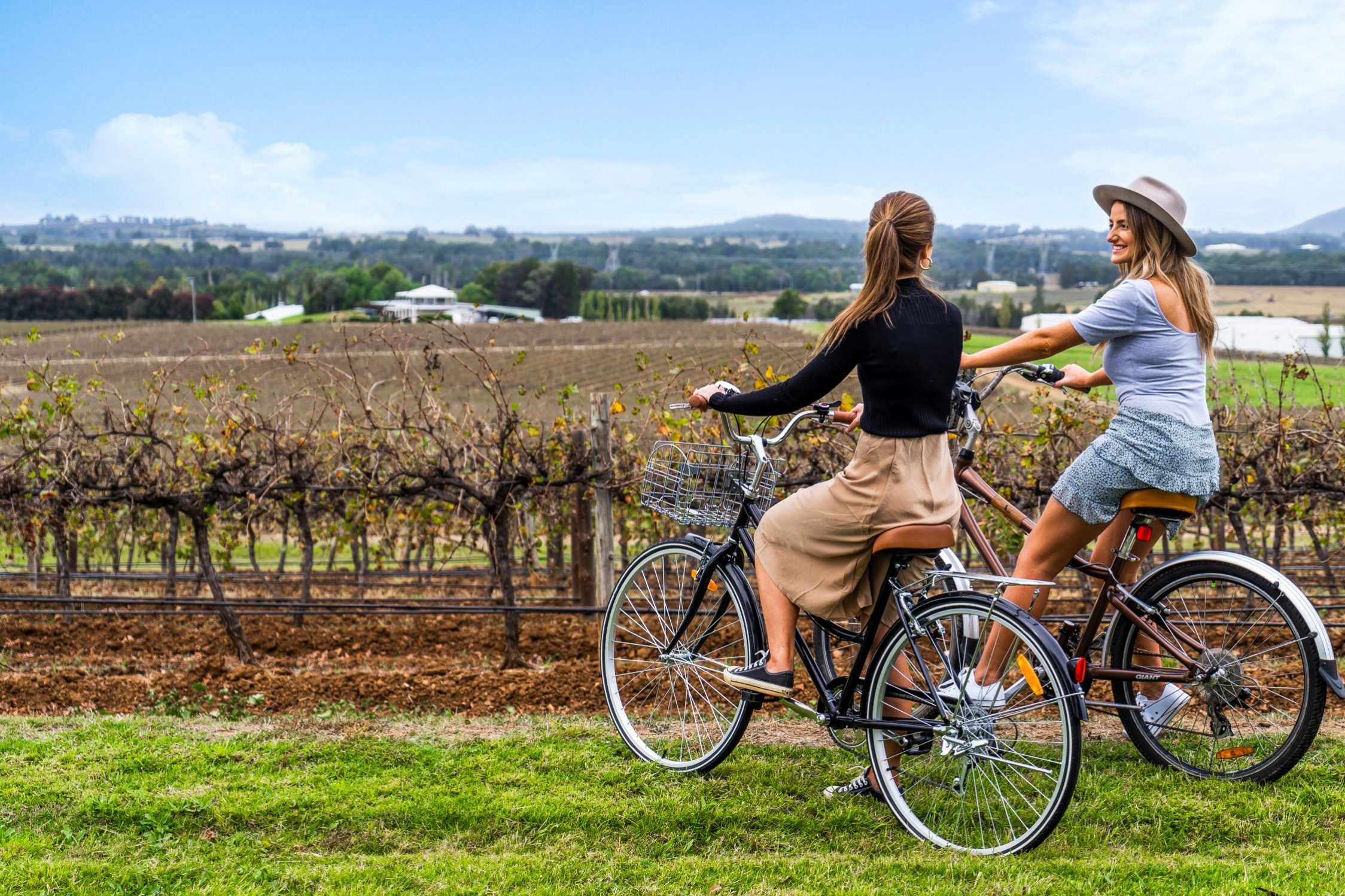 Around Hermitage in Pokolbin, Hunter Valley

There are many areas within the wine regions of the world that have unique characteristics that contribute to their regions. The Around Hermitage precinct of the Pokolbin sub-region in the Hunter has developed in such a manner. Other precincts include the Parish of Pokolbin, Central Pokolbin, and Lovedale.

This precinct is made up of some old vineyards such as the Hunter Valley Distillery and Belford vineyards but consisting mainly of the new plantings that followed the rebirth of the Hunter vineyards in the 1960s and beyond. A phenomenon that occurred in many countries such as Italy, France, Spain, and California in the post WW11 period.

These new vineyards reflect the “Terroir” of our end of the Valley with a mix of Creek bed soils – good for Semillon in particular, and red clay soils of the hills, a natural home for great reds. The Belford dome of Limestone dominates the hill areas adding to the complexity of the soils.

We are grouped along some 35 kilometres of road winding along the creek beds of the Rothbury and Jump Up Creeks and the hills of the Belford Dome and Sweetwater. The area includes Hermitage Road and all roads off it including Old North and Deasys Roads plus parts of McDonald’s, Broke and Sweetwater Roads.

The development of the Around Hermitage precinct has followed that of much of the lower Hunter vineyards following the retreat to the hills after the Robertson land act of 1860 opened up smaller parcels of land. The move was away from the river sites of the 1830’s, although Wyndham Estate remains there.

Early plantings include the HVD (Hunter Valley Distillery) block on the flat along the Rothbury Creek near the corner of Deasys and Hermitage Roads, by the Holmes family. Once owned by Penfolds, it is now part of Tyrrells. The old Elliots Oakvale vineyard was founded in 1893 and continues on as Oakvale Wines. Close by were the old vineyards of Glandore.

Hermitage Estate just up from the corner of Deasys Road, was originally known as Mistletoe Farm where grapes were first planted in 1909.

Then in the 1960’s and seventies, a new phase was ushered in as the consumers moved from predominately fortified wines to table wines. The Hunter Estate was established in 1967 with Shiraz, Semillon, Cabernet Sauvignon and a variety including Rhine Riesling, Traminer and Blanquette being planted.
Following along the Rothbury creek near Deasys Road Marsh Estate was planted in 1971 to mainly Shiraz and Semillon with a small amount of Cabernet Sauvignon. Next door Terrace Vale, now Hunters Dream, was planted also 1971 to Shiraz, and Semillon mainly with Chardonnay, Traminer, Cabernet and Pinot Noir. Further along this road, you find some newer vineyards including Degen Estate and Misty Glen near Mary Anne’s creek.

Next came the 1990’s when more vineyards were planted on selective sights and in response to the increased interest in Boutique wineries. De Iuliis vineyard was planted on Broke Road while Mistletoe, Tintilla Estate, Wombat Crossing, Iron Bark Hill (Peter Drayton Wines), among others were planted along Hermitage Road. These blocks have tributaries of the Rothbury Creek or Jump Up Creek on their lower aspects and clay soil higher up.

Heading higher up the dome, Belebula, its owner’s having an interest in Italian varietals, was planted in this phase. A little later came the Sweetwater vineyards such as Macquariedale with its organic wines and RidgeView. At the end of Old North Road is Black Creek Farm and Thélème Wines.

With all this development of vineyards and wineries along with small boutique hotels and farm stay accommodation, a group of us got together to form a Social and Business group, Around Hermitage, with a view to promoting this picturesque part of the Hunter Valley.

Wine and Food Trails were becoming popular during this period. A community spirit was developing and growing support among members was part of the organic evolution of our precinct. Viticultural services from Ken Bray and Fergie where also important as many newcomers were in need of support despite their passion for growing the vines. Being smaller there was also some degree of flexibility in the choice of varietals and a spirit of adventure.

The soils and aspect obviously determined the decisions and most followed the tradition of whites on the creek bed areas and reds on the elevated aspects. Some 25 years ago Tintilla Estate and Belebula planted Sangiovese, the grape of Tuscany, as there appeared to be an emerging market for this varietal. The soils and weather conditions had similarities to Tuscany along with the challenge of summer rainfall! Time has shown that by concentrating on the viticulture a fine wine can be produced.

The first initiative of the Association was the production and distribution of a brochure which helped those interested in exploring new vineyards and accommodation, away from the busy end of the valley to discover us.

The first event to bring our precinct into the public arena was “A Weekend Affair” which was held on November 1996. This was followed again with the same theme in 1997.

A most memorable and successful event staged was “Circus de Vine” which was held at Terrace Vale Winery, now Hunters Dream, in November 1999. It was a weekend to remember, the Big Top on site along with all sorts of stalls, entertainment, cooking demonstrations, clowns, etc. Funds raised that night resulted in a large cheque being given to The Westpac Rescue Helicopter.

The following year a Charity Fundraising Ball was held in the old warehouse at what is now known as the Hunter Bottling Company where the Pallets were built up for walls and decorations were made out of old vines.

Other successful events included The Olive and The Vine and Bush Poet’s BBQ that were held at Tuscany Estate. We have over time had interesting initiatives including the making of feature films about such as “The Life of Brian” about one of our famous wine producers Brian McGuigan and “Cooking for the Many and the Upper 10,000” linking our food and wine to the first Australian Cookbook published in the 1860’s.

More recently, we commenced another endeavor, “1ST Release Wine Week” to bring our followers, mainly wine club members of the various vineyards, and others in Spring to try the new seasons’ releases and also releases of more mature wines, mainly Reds. Each “Cellar Door”, as the salesrooms are called, promotes its own wines but we come together for a dinner to celebrate the vintage that has just passed.

Now, home to what are generally regarded as some of the best boutique wineries, cellar doors, restaurants and accommodation in Pokolbin, the Around Hermitage family has grown dramatically. Business members now include a plethora of Wineries and Cellar Doors, Restaurants and Cafés, Accommodation Venues, Wedding Venues, Wine Tours, Antiques, Galleries and more.

As well as making the classic wines the Hunter Valley is known for such as Semillon, Shiraz, and Chardonnay, some of the Around Hermitage winemakers are achieving success with the more modern European styles of wine including Sangiovese, Tempranillo, and Nebbiolo. In the early days, Cabernet Franc was planted when thought to be Merlot so there is a sprinkling of it about as well as the real thing. Merlot does well on the red clay blocks where the moisture is held and roots enjoy the soil leading to ripe and flavoursome grapes.

A new varietal developed by the CSIRO research group, Tyrian has been planted by Peter Drayton at Ironbark Hill and is proving very popular particularly as a fresh, drink now red.