Discover: Being Wild About The Valley 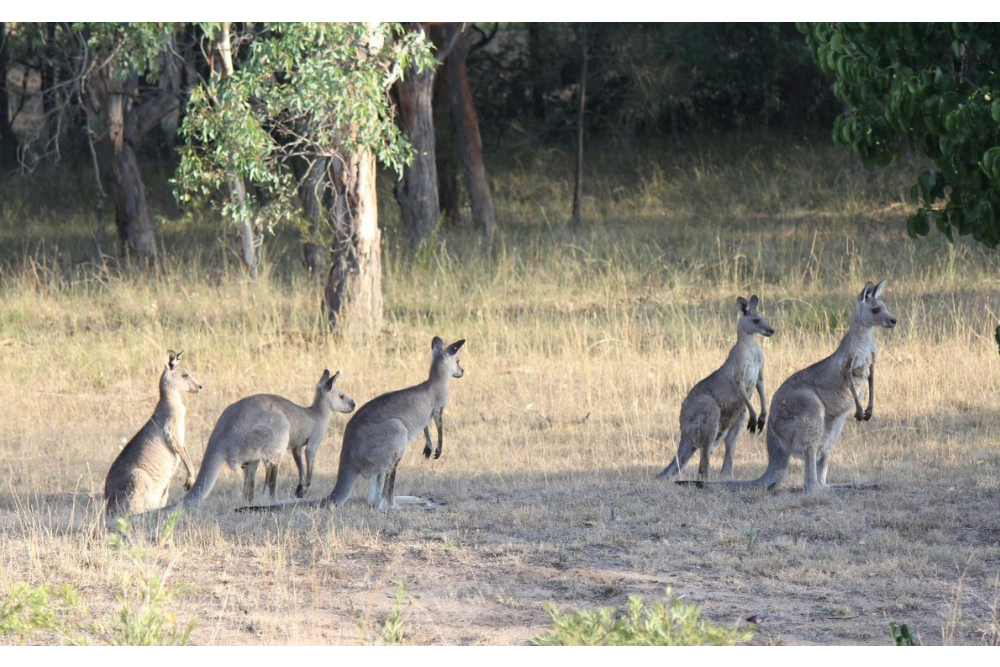 It is easy to be wild about The Hunter Valley! There are examples of nature’s resilience all around, and one of the features of a visit is that you can see wildlife amongst the gum trees.
There are the easy to spot kangaroos freely found throughout the area without going to a national park, some very special and rare birds, some significant conservation programs near-by and our own zoo.
· Eastern Grey Kangaroo
The kangaroos seen about the Lower Hunter Valley are the eastern grey, the second largest and heaviest living marsupial land mammal in Australia. They have a powerful tail that is over 1 m long in adult males. The eastern grey’s colouration is a light-coloured grey or brownish-grey, with a lighter silver or cream, sometimes nearly white, belly. The highest ever recorded speed of any kangaroo was 64 kilometres per hour (40 mph) set by a large female eastern grey. In the middle of the day, kangaroos rest in the cover of the woodlands and graze there but then come out in the open to feed on the grasslands in large numbers in the evening, night and early mornings. Females take care of the young without any assistance from the males. The joeys are heavily reliant on their mothers for about 550 days which is when it is weaned.

This is a striking black, yellow and white bird, usually moving in small flocks. This honeyeater is now confined to Victoria and New South Wales, especially the western slopes of the Great Dividing Range, in eucalypt forests and woodlands, particularly in blossoming trees and mistletoe. It feeds on nectar and other plant sugars, insects, spiders, native and cultivated fruits. It is seen in the Lower Hunter Valley in the Tomalpin Woodlands and Werakata National Park, along with the critically endangered swift parrot. Conservation efforts are presently focused on protecting and restoring habitat at all regularly-used sites and on increasing the availability of preferred habitat overall.
https://www.birdlife.org.au/bird-profile/regent-honeyeater
http://www.environment.gov.au/biodiversity/threatened/publications/factsheet-regent-honeyeater-xanthomyza-phrygia
· Hunter Bird Observers Club – do a bird walk
The Hunter Region contains many bird watching sites of world significance, including two registered Ramsar sites (Hunter Estuary Wetlands, near Newcastle, and Myall Lakes further to the north) and six Key Biodiversity Areas (KBAs). More than 450 species have been recorded in the Hunter Region, making it one of Australia’s most prolific birding locations.
https://www.hboc.org.au/
For information on Birding Routes –Lower Hunter Maitland see https://www.hboc.org.au/wp-content/uploads/Maitland_BirdRoute_webSept17.pdf
· Devil Ark
High in the hills of the Barrington Tops is a critical project working to save the endangered Tasmanian devil. The iconic Tasmanian marsupial is at serious risk of extinction from the highly contagious devil facial tumour disease (DFTD).
Tours and other information see https://www.devilark.org.au/
· Hunter Wetlands Centre Australia
Take a walk or ride your bike around the site; book a tour or go canoeing. Bring your camera and photograph some of our amazing wildlife. Kids can have fun at the Discovery Playground, try dip netting and meet some of our birds and reptiles. Special events: School Holiday programs, Easter Fun Day and art exhibitions
1 Wetlands Place Shortland https://wetlands.org.au/visit-us/
· Hunter Valley Zoo
Book in for hands-on, interactive animal experiences, visit for daily shows at the Hunter Valley Zoo located on Lomas Lane, Nulkaba which is only 5 minutes from Cessnock.
https://www.huntervalleyzoo.com.au/
Robyn and Alan Valley View Cottage
SHARE THIS POST
Share on FacebookShare on Facebook TweetShare on Twitter Pin itShare on Pinterest Share on WhatsAppShare on WhatsApp
LIKE US ON FACEBOOK