More than meets the eye; Interment and Beyond 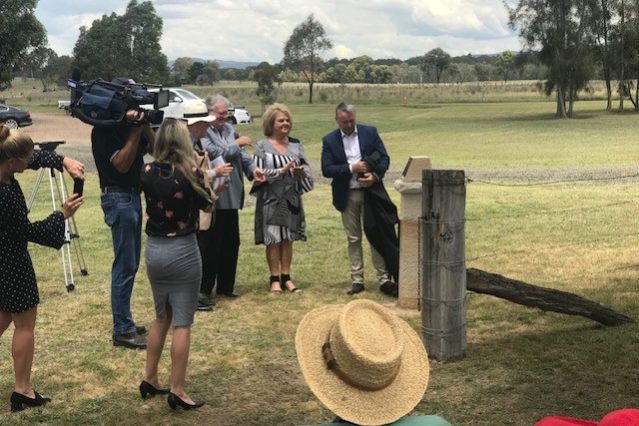 More than meets the eye; Interment and Beyond.

We recently went to an important event in the Rothbury, Wilderness Road Cemetery, not a place I would normally hang about in. However, it was a gathering of people from the Hunter wine growing community present to see the unveiling of the seventh Cairn dedicated to significant historical sights and events in the area. An initiative of Brian and Fay McGuigan and others to help preserve the history of the Hunter winegrowing region – the oldest in Australia.
Now I had only heard of a Cairn when watching archaeological programmes when great excitement often followed the discovery of a pile of rocks. These human-made stacks of rocks are a marker of an important landmark, burial or ceremonial event. The word comes from the Scottish Gaelic “cárn’.’ They have also been used as trail markers, an idea Brian McGuigan tells me he would like to develop.
So we were gathered in the historic Rothbury cemetery at the back of Emma’s Cottage, that dates back to about 1851. It has some key winemaking players from the Holmes, Lambkin, Joass, Tyrrell, Wilkinson, Campbell, Jouault families and more recently Murray Robson. I also had a distant relative, William Pidcock, not of the winemaking kind buried there in 1861.
Phil Ryan and Brian McGuigan spoke eloquently about the importance of the project. Brian quoted from a history of the cemetery by Jim Fitzgerald noting it was on a property called The Wilderness owned by Joseph Broadbent Holmes. He also offered Alfred Gleenie two acres of the property on which to build St. Pauls C of E church – subsequently opened by Bishop Tyrrell in 1867.
Julie McIntyre, author of the recently released book ‘Hunter Wine’ also spoke and touched on why Cemeteries are an important part of Australia’s past. Her book lists in appendix 2 some 13 cemeteries that are sites of the Hunter winegrowing community.
Julie alluded to the importance placed by the National Trust on cemeteries as expressions of our culture and Identity, noting they provide a history of the nation’s growth, changes in style, taste and insights into its development. The headstones record occupations and often the cause of death, reflect the economic and social status of the individuals and district.
Joel Fitzgibbon, the nearest thing to a liberal in the Labor Party as he was introduced, unveiled the Cairn with Fay McGuigan
Of course gravestones, funerary casks, sarcophagus and memorials have always been a mirror reflecting civilizations. At the current ‘Rome its Cities and Empire’ exhibition in the Canberra Museum, this burial cask is on display depicting the Greek God Dionysus at his wedding. The detail in the carving is amazing. He was regarded as the god of grape-harvest, winemaking and wine. He wore several hats including the god of fertility, ritual madness, religious ecstasy.
Looking at the carvings one can see the role wine played in Greek Culture. Depicted in the carvings are Maenads – female dancers whose wild dancing linked them in communion with Dionysus. Tintilla Estate has a maenad on its label as a nod to the ancient Greek god. Depicted on the carvings are Satyrs playing the pan flute, dancing and attending Dionysus. Here he is sitting on a steer, overweight and with a beard but over the 700 years his image changed reflecting social and religious views.
Later the Romans adopted the cult and renamed Dionysus as Bacchus.
The cult of Dionysus was also a “cult of the souls”, and communion with him involved drinking wine among other things.
At the time of Christ, his cult was the dominant religion in the middle east so the concept of drinking wine being the blood of Christ was not a difficult one to understand.
A list of Heritage Cairns is found in Hunter Wine, by Julie McIntyre and includes Edward Tyrrell’s slab hut, Old Cellar – Drayton’s Family Wines & Old Vats at Audrey Wilkinson wines, the Old Still House Ben Ean Winery and Maurice O’Shea Mount Pleasant Label- Mount Pleasant Winery, Tulloch Wines Pokolbin Dry Red Label, Halls Cottage – Robert’s Restaurant, Marthaville Homestead & the 1973 Vintage Festival Poster, Cessnock.
Given the long history, relatively speaking, of the Hunter there will doubtless be many other points of interest documenting our development. Just as the Greeks and Romans celebrated their achievements we should do the same as part of our social and National record. It is important that these are identified and preserved for future generations while people with memories of the past are still here even if it means exploring the odd graveyard. Congratulations to Brian and Fay and their committee for this great initiative.
I have used the following in writing this blog:
Hunter Wine; A history. Julie McIntyre and John Germov. Newsouth Publishing, Sydney, Australia. 2018
National Trust of Australia Cemetery Conservation
The Rothbury Cemetery at Emma’s Cottage Australian Cemeteries index
#aroundhermitage #huntervalley #bobsblog #tintillaestate
Author: Robert Lusby AM
©Around Hermitage Association
https://www.visitnsw.com/destinations/hunter/hunter-valley/pokolbin/attractions/hunter-valley-heritage-cairn
https://www.scarboroughwine.com.au/blog/Hunter-Valley-Legends—Heritage-Cairns
SHARE THIS POST
Share on FacebookShare on Facebook TweetShare on Twitter Pin itShare on Pinterest Share on WhatsAppShare on WhatsApp
LIKE US ON FACEBOOK