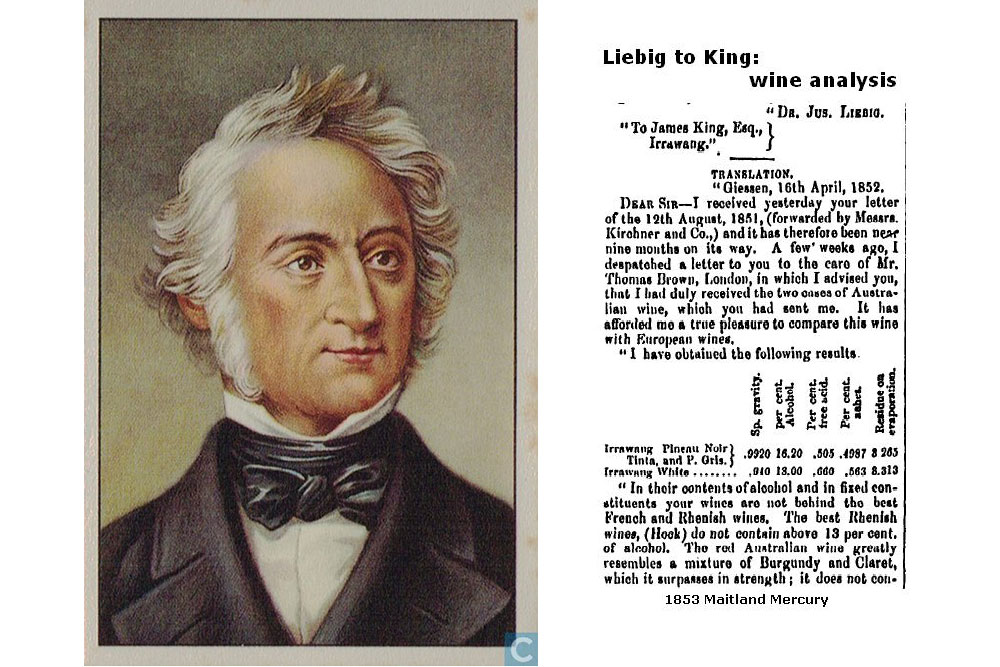 It is not by any accident of fate that the Hunter Valley was established as a fine wine producer. From the early days, wine making was modeled on the French example and Fine table wines were the object of our pioneers.

The exchange of experiences and ideas was a key reason for establishing the Hunter River Vineyard Association (HRVA) in the 1840’s when it was recognized that those men, who were products of the enlightenment, had little background in grape growing but were prepared to apply scientific enquiry into their efforts and explore the adaption of vines to the Hunter environment.

James King of Illawang was a prime mover and undertook correspondence with the leading European scientist of the day. Justus von Liebig had made the most important discovery that Nitrogen, Phosphate, and Potassium (NPK) were the key elements required for plant growth. King sought advice about many aspects of grape growing and wine making including sending samples of Hunter wines for chemical analysis. Von Liebig’s contribution was such that he was made an honorary member of the HRVA.

The proceedings of the HRVA bi-annual meetings were published in the Maitland Mercury, there being no available journal and it meant the information was widely disseminated. Comparative tastings were a key element of their meetings and the May 1848 meeting records their assessment of wines and comparison with a Burgundy from Chambertin. The French wine had been imported from London and invoiced at 45 shillings per dozen. The Chambertin “when opened was considered a very fine wine, equal to the best the members had drunk”. Two wines were then compared- the first of black cluster grapes (Pinot Noir) was” considered to be scarcely at all inferior having the same flavor, with a full rich body and a softer taste to the Chambertin. Mr. King’s wine of vintage 1846 was held to be so closely equal to the other two, that age would probably place it on the same level.”

The French wine had been imported from London and invoiced at 45 shillings per dozen. The Chambertin “when opened was considered a very fine wine, equal to the best the members had drunk”. Two wines were then compared – the first of black cluster grapes (Pinot Noir) was” considered to be scarcely at all inferior having the same flavor, with a full rich body and a softer taste to the Chambertin. Mr. King’s wine of vintage 1846 was held to be so closely equal to the other two, that age would probably place it on the same level.”

The comparison of these wines it was reported: “excited a general feeling of surprise”. It required this actual comparison with a first rate wine to estimate “fairly the quality of the colonial wines”. Not to be blinkered, they noted the Chambertin appeared to be the best and most agreeable, with a quicker and more winey flavor in the mouth. However, they felt the difference in quality was so slight that, with age and careful management the colonial wines, would quite equal the Chambertin.

After the Robinson Land Act of 1860 and the freeing up of land to selectors, most of the grape growing moved from the riverside to the hills around Pokolbin. Again in the European tradition vineyards clustered around hill sides appeared to thrive in terms of quality.

A great example of this can be seen in the development by Maurice O’Shea of the Mount Pleasant vineyard. The vineyard planted originally by Charles King a descendant of James King and purchased by his mother in 1922 for a place his brother Jack, injured by gassing during the war, could have fresh air and where Maurice just back from studying viticulture and wine making in France could work. In fact, it was Maurice that named it Mount Pleasant.

Until this time there was no one as qualified as O’Shea in the wine making game. The valley had benefited by having a variety of vine-dressers from parts of Germany and Hungary and many experienced farmers with a keen interest engaged in wine making but to have O’Shea a graduate of both Montpellier and the Institute National Agronomique Paris- Grignon (the best wine education centre in the world) was truly a step up. He continued setting the direction of the Hunter Valley into a Fine table wines region, not into the fortifieds that most of Australia were producing.

The topography and climate of Mount Pleasant were recognized by O’Shea as being well suited to grape growing having had his eye well trained while in France. The unique character of the Pokolbin grape growing area was later noted by John Gladstones, famed author of Viticulture and the Environment. He pointed out the influence of The Brokenback Range, a ridge which enjoys outstanding air drainage. Its eastern to northern slopes combine the advantage of soil warmth due to aspect with good red soils and full exposure to early sea breezes. Those vineyards in proximity to this area, that wrap around the foothills of the Brokenback, in theory as well as in proven practice enjoy the Hunter Valley’s choicest viticultural environment.

In making the Mount Pleasant wines grapes from separate blocks were picked and processed separately and bottled for instance as Henry (1, 2, 3, Mount and Prince). Besides making wines of the Mount Pleasant vineyard O’Shea cherry picked fine wines from others in the area such as Dan Tyrrell and Doug Elliott to blend with his own wine. He was very careful to ferment every parcel of grapes separately and then blend the final product, often adding a small amount of Pinot Noir to the Shiraz! He was happy to indicate the source of the grapes on some blends giving them names such as T.Y and Richard for Tyrrells and Charles for Elliotts. I mention the incorporation of other producers wines to highlight the fact there were a number of very good winemakers circling around the fine wine production in the Hunter and obviously were stimulated by the competition and were building up the reputation of the Hunter wines.

One great friend of O’Shea was Dr. Gilbert Phillips, a co-founder of the Wine and Food Society and founder of the Wine Consumers Society, important vehicles for the promotion of Hunter wines. The two were great promoters of discussions among winemakers and others about the quality of Hunter wines. Max Lake attributes the freeing up of Hunter wines from the tyranny of French name comparisons to O’Shea and Phillips. This lets Hunter wines stand on their own merits- “calling Hunter red a medium dry red is clear communication and the taster approaches the wine with mind unfettered”. No confusion or unrealistic expectation created which can occur if a wine is called a Burgundy for example.

Interestingly O’Shea worked his magic in very primitive conditions in a tin shed with no electricity, to cool his wines during ferment he used ice brought up from Cessnock. (a practice still used in parts of France where adding water is prohibited!) He was meticulous in his wine making separating the free run juice from various grades of pressings for later blending. He made his own yeast cultures based largely on champagne cultures and enjoyed scientific support from the state viticulturist and close friend Harry Manuel and another friend David Rheuben lent him his laboratory facilities at his Newcastle Ice cream factory!

His viticultural training led him to plant many different cuttings including Aucerot, Montils and Picpoul are mentioned by Max Lake as white varieties that made excellent wines in small quantities. His wine making skills were driven by his high standards and searching for improvements which would bring out the potential in each parcel of wine.

Many regard him as one of the greatest blenders of wine possibly as a result of his acute sense of smell. Campbell Mattinson in his book “Wine Hunter” tells the story that O’Shea had poor eye sight from childhood and while in France at the start of ww1 he set out to join the army but was rejected due to poor vision. Later he met some friends and went out to dinner. Rationing had commenced so when the meal was served he sensed it had an unusual smell, none of his friends noticed but then it was revealed the meat was Cat Provencale. It was at that time he realized he had compensated for poor vision with a highly attuned sense of smell.

Maurice O’Shea is a great example of how, with application, that from a small vineyard, it is possible to build a national and international reputation for Hunter wines. The principles still apply to the Hunter today, we may be a small producer in terms of volume but we remain the most recognized Australian fine wine region, for instance, in the UK. Many tourists coming to Australia with an interest in wine find their way to the Hunter and don’t get to the rest of Australia. In this way, we are an important part of the wine industry being readily on

Many tourists coming to Australia with an interest in wine find their way to the Hunter and don’t get to the rest of Australia. In this way, we are an important part of the wine industry, being readily on show for overseas visitors with quality fine wines and a well-tuned cellar door experience.

The combination of good viticultural land, terroir, experienced viticultural practice, scientific and well-practiced winemaking and above all passion, passion, and passion has enabled us to maintain the great traditions we have inherited from the men of the enlightenment through the O’Shea era and the rebirth of the 60’s. Let’s drink to that (but only in moderation)!