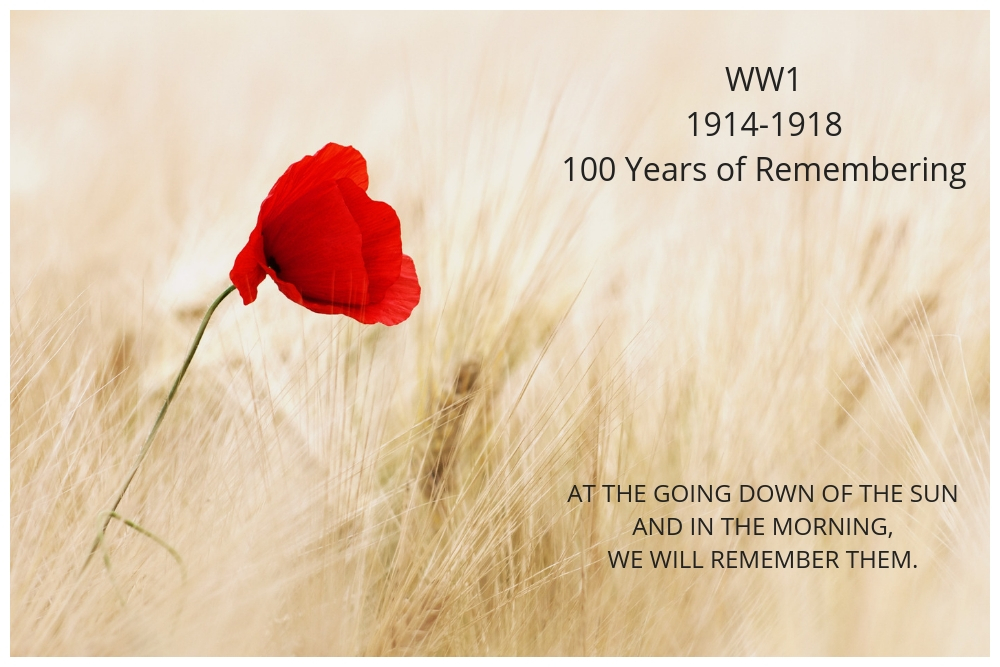 Today it is 100 years since the Armistice on the 11th of the 11th 1918 that brought the fighting of the First World war to an end.
It’s hard to imagine the relief even elation that gripped the men and women in the trenches and the nations involved.
No longer waking to the sounds of bombardment on the battlefront, the stench of death, the cries of the wounded, the movement of casualties and families hoping not to get that letter notifying them of the death of their relative.
Overall there were some 10 million dead including 7 million civilians by the end of the conflict.
Like many endeavours having reached a climax, there is a period of let down and reflection following.
The Paris Peace Conference followed which led to much discussion among the allies, each with a different view of the desired outcome.
The armistice was finally signed some 8 months later at Versailles in the Hall of Mirrors…it was exactly 5 years since the assassination of Archduke Franz Ferdinand, heir to the throne of Austria-Hungary.
Australia, being a Dominion of the UK was drawn into the conflict early on, and at the time support for the mother country was welcomed by most.
While so far from the battles, we contributed significantly both in men and ideas. We also had to work through the issue of Conscription.
Australia had the highest percentage casualty rate, 65%, among all the Nations involved with some 60,000 dead and 156,000 wounded, gassed or taken prisoner. At the time our population was about 5 million, with just under 10% of Australians, 440,000 enlisting.
In many ways, our involvement helped to define our young Nation. We emerged with a greater belief in ourselves, our ability to partake on the international scene and to resolve issues at home.
From Rubaul and New Guinea to Gallipoli, the Western Front, the Middle East including the defence of the Suez Canal, the capture of Gaza and Jerusalem and occupation of Lebanon and Syria…Australia played a key role.
Under General Monash we played an important role in establishing the combined use of troops supported by Tank, air, radio, highlighted in the successful battle of Hamel in July 1918-a combination that eventually led to the defeat of Germany.
Today we commemorate Remembrance Day to include all 65 engagements including peacekeeping exercises Australia has been involved in.
Originally called Armistice Day it is interesting to look at that word- defined as a temporary agreement made by opposing sides in a war to stop fighting.
In many ways, the failure of a satisfactory drawing up of the Treaty of Versailles meant a resumption of hostilities in 1939!
The military philosopher, Carl von Clausewitz in his famous book, On War, points out that war is basically a tool used for political ends.
The members of the military are pawns in the play of politics and the endeavour to bend your opponent to your will.
So the outbreak of hostilities in 1914 was basically a failure of political leaders to resolve issues and resorting to war as a result.
Many would say the failure of our politicians to come to a satisfactory agreement in drawing up the treaty of Versailles led eventually to WW2
The so-called War Guilt Clause in the treaty required territorial concessions and significant reparations that many considered too harsh.
John Maynard Keynes the economist and delegate to the peace conference described it as a “Carthaginian peace”, reflecting Rome’s destruction of Carthage. He regarded it as counter-productive. The French Marshal Foch on the other-hand regarded it as too lenient.
The result as we know was that Germany was neither pacified nor conciliated and unrest led to the rise of Hitler, who managed to rearm and build support for another war.
Australia, as a Nation, has taken on its international responsibilities in the tradition of the ANZACS and played an important part in many modern conflicts and Peacekeeping operations.
Our service personnel have often paid a high price when called on by Government. Asked to do extraordinary things beyond the imagination of ordinary people for the benefit of our nation.
On this Remembrance Day let us not forget how fortunate we are as individuals and as a free Nation. We must remember the sacrifices of the men and women who have served the country
so well and their families whose support is critical.
Lest we forget.
Address by Robert Lusby AM
Emeritus Professor, University of Sydney
Retired Colonel RAAMC
I have used the following
Memorial Articles Australians at war The First World War Australian War Memorial
Treaty of Versailles Wikipedia
Carl von Clausewitz On War edited and translated by Michael Howard and Peter Paret. Princton University press 1989
#aroundhermitage #huntervalley #bobsblog #tintillaestate
Author: Robert Lusby AM
©Around Hermitage Association
SHARE THIS POST
Share on FacebookShare on Facebook TweetShare on Twitter Pin itShare on Pinterest Share on WhatsAppShare on WhatsApp
LIKE US ON FACEBOOK