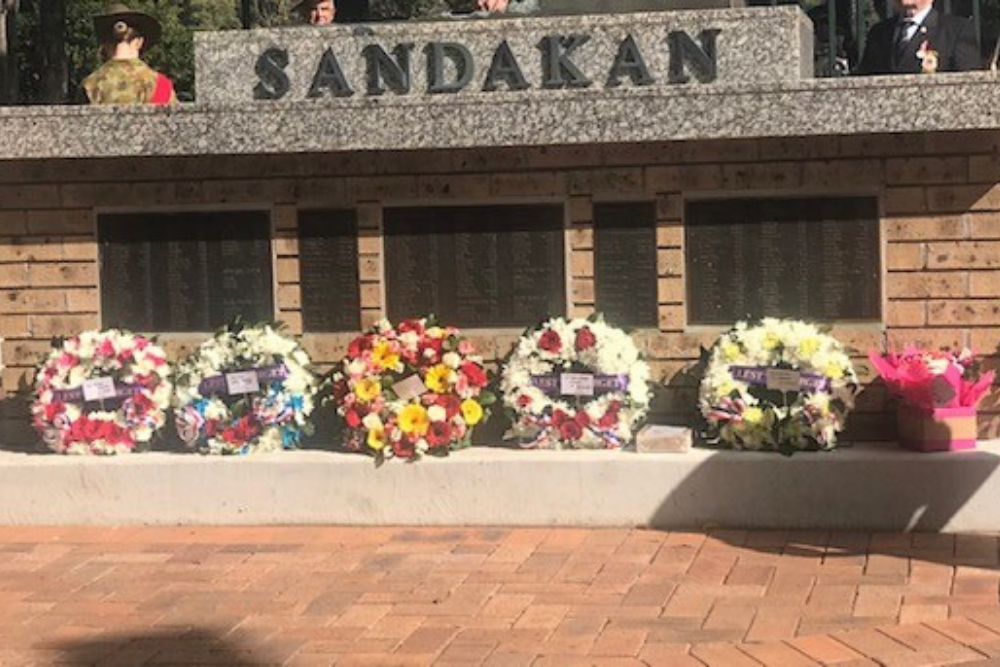 When asked to speak at this ceremony in memory of the infamous Sandakan Death March, the words of a song sung by  Roy Orbison came to mind

There won’t be many….there may not be any…

If none come back but one, he is Still some mothers son…

There won’t be many coming home.

With only SIX Australian POWs surviving out of 1787 men, in the three years on the Sandakan – Ranau Burma camps it represents one of the darkest events in Australian History.

Little is known about the events that took place due to the lack of survivors, whereas there is much more recognition of the terrible treatment of POWs on the Burma Railway where many more survived to tell their stories.

Prior to the defeat by the Japanese, the key to the British Empire defense planning in Asia had been the so-called impregnable ‘Fortress Singapore’.  The guns were pointing out to sea and backup was expected from Britain…some months away. However,  the Japanese landed on the Malay Peninsular in December 1941 (the same day as Pearl Harbour) and moved overland to come through the back door to Singapore.  It became obvious with the war in Europe, no support was possible from so far away.

With minimal air support, the defenders of Malaya- British Empire soldiers including the 8th Division AIF had to make do. Some initial success was experienced, such as the 2/30th Battalion (my uncle Robert was a signalman)  in mid-January ambushing the oncoming invasion force.

However, these efforts were mere drops in the ocean trying to stop the mobile Japanese forces who had the advantage numbers and of air cover. Eventually, the troops were evacuated to Singapore on 31st January. All was lost by 15th February with an unconditional surrender.

In the annals of human suffering, Australians have their own special chapter and an enduring legacy arising from the fall of Singapore.

At Sandakan, in late 1944 some 2,600 Australian and British POWs were held in Borneo. They were starved of food, scourged, and worked excessively till they dropped. Even the water was rationed!

With the approach of the allied forces the Japanese Commander, Lt General Baba Masao ordered the POWs to be marched some 260 Kilometers through dense Jungle with minimal rations to Ranau. Clearly, this was an attempt to kill all the POWs Indeed none survived, save six men who escaped and were sheltered by local villagers.

Much of the story that has come down to us about the “hell” that was Changi is, in reality, a compilation of what happened to the POWs sent as slave labor under horrific conditions to build the Burma-Thailand railway where 2800 Australians or 30% did not survive, and at Sandakan in Borneo to build an airstrip where 0.3 % of the 1787 Australian soldiers, only survived.

Prisoners across Asia faced quite different conditions depending on local situations and the attitudes of camp commanders. At Sandakan, in the first year, the situation was not so bad but got far worse with the change of commanders and even worse later on.

Almost 97% of the 87,000 Allied prisoners taken to Changi camp lived- only 850 died in the camp. It was, as some prisoners said, more like Heaven compared to the experiences in other places.

Weary Dunlop said in his war diaries ‘only those ill, emaciated and thin, who slept on exposed rough surfaces in all weather could comprehend the depth of sacrifice’.  Starved, scourged, infected with malaria, suffering dysentery, beriberi and offensive, stinking tropical ulcers, in desperation. When death reached out it was welcome as a blessed relief.  “they shall hunger and thirst no longer”

It is little wonder that the men who suffered in captivity developed a reactive hatred of their captors with few exceptions. With time, however, those feelings softened and a broader understanding of the clash of cultures and shared experiences have emerged.

One unifying fact of warfare is that all men are equal in the face of suffering and death.

The Japanese losses in the end far exceeded our own-not to forget the devastation by bombing of every Japanese city even before the final blow with the dropping of the Atomic Bombs.

The suffering of those Australians in territory so close to us, virtually in our own backyard, produced a new reality. Not in far off Gallipoli or the western front as with WWI but so close to home.

And of course, the suffering and loss extended far beyond the battlefield or POW camp. It engulfed those at home, the families of all those men who died and possibly even more so those who had to care for the mentally and physically injured survivors.

How do the men and families cope with the outcome of such situations?

The war crimes commission dealt with the worst individual offenders and there was a recognition that there had been much suffering among the Japanese people also.

With time understanding and acceptance by Australians led to an accommodation of the Japanese people. Looking forward is the solution that many who have suffered have adopted.

As Nelson Mandella expressed it so clearly – Forgiveness is far better than remaining a mental prisoner for life by dwelling on the events of the past. Freedom comes by shaking the monkey off your back.

And this freedom enables us to understand aspects of our enemies and deal with them with clear heads, not sidetracked by hatred or seeking revenge.

As a result, we can see there is much to admire in the post-war recovery of Japan. In many ways, our prosperity has been built on the industry, ability, and fervor of a people who rebuilt their shattered country and our ability to put the war behind us.

The insight of the USA in not seeking reparation but encouraging prosperity in both Germany and Japan has been a formula for reducing the risk of war and building prosperity for all.

Out of the tragedy that was Sandakan, Burma, and Changi a new kind of freedom was won by the individual sacrifice. The Australian character was strengthened and we worked through the many issues to emerge as strong trading partners and friends of a people who were once our enemies.

It is fitting that today we remember the many who died fighting for our freedom and the lessons learned by us as a nation as a result.

I have used the following in preparing this talk

Photos taken in the Sandakan display at the Australian War Memorial