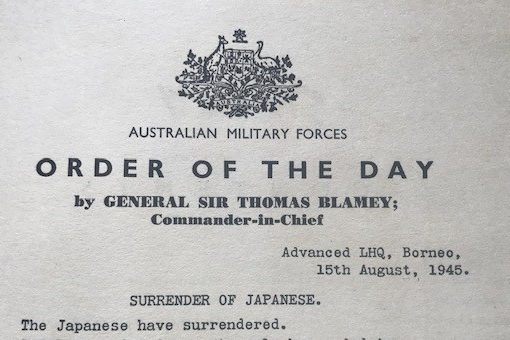 Today we commemorate the “Victory in the Pacific” the day 75 years ago on which Imperial Japan surrendered, bringing to a close World War Two.

Named Pacificus by the Portuguese explored Ferdinand Magellan some 500 years ago for its tranquil qualities, although he had died fighting in the Philippines from a poisoned arrow. The fall and reconquest of the Philippines played a key role in the Pacific war and the fame of General Macarthur. 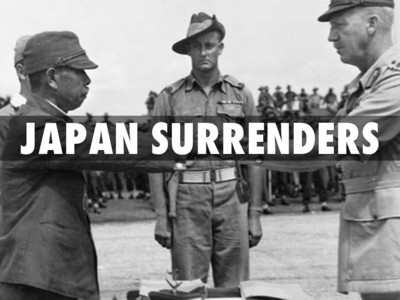 Of course, in any victory, there has to be a loser and this day has also been called Victory over Japan Day. It was not until 2 September that the surrender was formally signed on board of the USS Missouri with General Macarthur on behalf of the US and General Sir Thomas Blamey, Commander-in-Chief of the Australian Military Forces doing so on behalf of Australia.

Victory in the Pacific came as a result of high courage and human endurance in at times unbelievably difficult conditions,  in terrains mostly foreign to us, of strength drawn from deep within and strained to almost breaking point, of a belief in freedom and love of family and our Australian way of life.

We are all familiar with the history of the Japanese Bombing of Pearl Harbor and almost simultaneously their advance down the Malayan Peninsular, followed by the fall of Singapore and the move into the Dutch East Indies, the Philippines, and New Guinea. There were 15000 Australians taken prisoner, many to die on the Thai- Burma Death Railway and the infamous Sandakan death march. 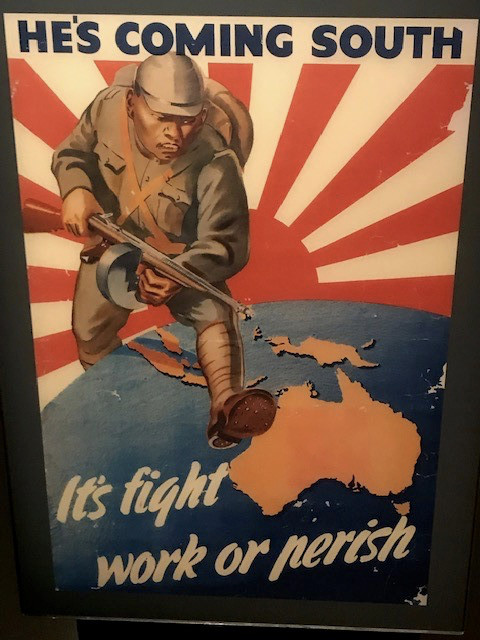 We were unprepared for the rapid advance of the Japanese with thousands of Australians serving on land and in the air in the middle east, at sea with the British navy and in the defense of Great Britain in the RAF.

Darwin was heavily bombed.  This despite the advanced warning by “Tokyo Rose”. Our defenses were inadequate although the strategic importance to Japan was clear, in protecting its newly acquired territories containing the oil and other supplies it needed to continue the war.

We fell back on our Militia, the Army reserve, to come to our initial defense, in particular, the 39th Battalion sent to Papua New Guinea to meet the advancing Japanese on the Kokoda trail. As our troops returned from the middle east they also were thrown into the fight with Japan in PNG.

The Story of Kokoda is well known, fighting a defensive retreat against a determined and savage enemy, to within eyesight of Port Morseby until the Japanese supply lines failed and their army was starving. Then we were able to chase them back to the north coast and drive them into the sea. Ninety percent of the Japanese 144th regiment died, starvation was so bad at the end it led to cannibalism, a sad fact not often talked about. 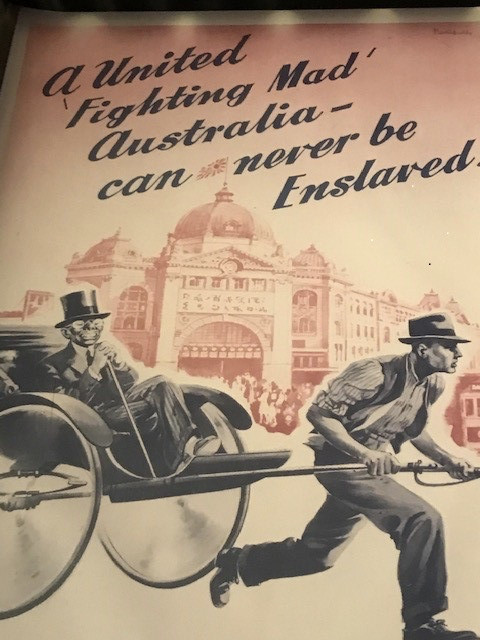 The first defeat of Japanese forces in the Pacific war was in fact by the Australians, in Milne Bay and Kokoda.

The shift from Britain to an alliance with the United States was of necessity and a major outcome of the war.

The final expulsion of the Japanese from New Guinea was a combined effort with our American allies. Indeed, the Kokoda success was influenced by the US invasion of Guadalcanal forcing the Japanese to alter their support of troops in New Guinea.

The Pacific war we all know about -the battle of the Coral Sea, Midway, Island hopping, Rubal, the Philippines, Iwo Jima, Okinawa, Firebombing of Japan, the Dropping of the Atomic Bombs and finally the Russians opening a new front in Manchuria, threatening to divide Japan into a communist northern and free southern country.

All these battles have one thing in common: the savagery of the engagement, the extraordinary expenditure of life and the fierce determination by both sides not to surrender but to win.

“Take no prisoners” was the policy first encountered on the Kokoda Trail where fierce hand to hand combat took place where soldiers could see the eyes of the men they were killing.

Throughout the Pacific war, there was resolve and courage on both sides. As always, the real story rests with the warriors the ground.  A relatively new kind of warfare emerged,  the challenge of jungle fighting, (the 39th initially were issued with khaki uniforms as “jungle Greens” were not available!), close combat with ordinary men killing and dying with little chance of the wounded surviving.

At sea, naval air warfare came to the fore particularly in the great sea battles and sinking of aircraft carriers.

The importance of supply and resupply was an essential element of the Pacific war. Indeed, the Japanese failure to protect its merchant ships led in part to its downfall and the starvation of the homeland civilians.

The high cost of lives in the taking of Iwo Jima and Okinawa led to estimates of up to 4 million allied casualties if the Japanese Home Islands were to be invaded with some 400,000 to 800,000 deaths. In addition, some 5 to 10 million Japanese would die. 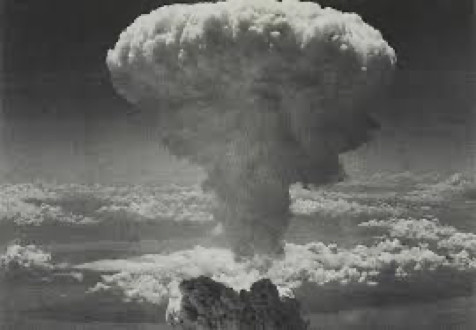 At this stage, the Japanese were not seeking to surrender despite the firebombing of all its cities and running out of food and supplies. Their determination to fight to the end led to the dropping of the Atomic Bombs on the 6th and 9th of August.

Despite some 355,000 people dying, as a result, to continue the war would have led to many more deaths.

On the 8th of August, the Russians invaded Manchuria planning an invasion of Japan. This combination of events then led the Emperor to surrender on 15th August 1945.

As Col Ralph Honnor commander of the 39th Militia Battalion said to his men as they stood down on the Kokoda Trail,

“You have seen things in this place that no man should witness. Some of these things you must forget. But history will remember you, and in years to come others will wish that they had your conviction.

Man’s nobility made transcendent in the fiery crucible of war.

I have used the following sources in writing this blog:

Khaki and Green with the Australian Army at home and overseas: Australian war Memorial, Canberra ACT 1943

Illustrations from photos taken in the War Memorial Canberra ACT, and sundry sources