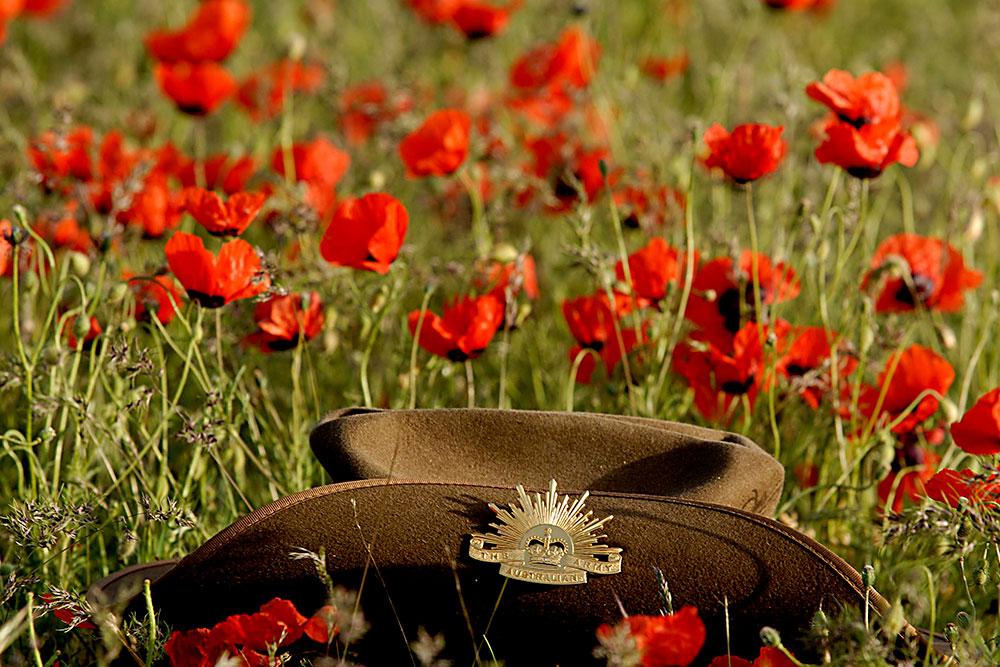 Gallipoli, Palistine, The western front, Tobruk, Crete, Kokoda, Korea, Malaya, Vietnam, Afganistan, Iraq: These are the names of some of the places Australians have fought and died in the name of Freedom and our Democratic way of life.

The name ANZAC was conjured up in the HQ mail room in Egypt where the Australian and NZ troops were stationed just before the Gallipoli landing .
In our young country, voluntary recruitment was on a state by state basis. In Gallipoli, where men fought and died side by side, we were united as a single nation for the first time. The actions of our men on Gallipoli displaying bravery, valour, courage, determination and above all a unique spirit of mateship, provided a much needed national story that would help define our values.

Although we were unsuccessful in a military sense, under fire we forged a new identity that has led to the 25th of April being observed as a sacred event, observed by Australians of every age.

In the 20th Century some 500,000Australians and New Zealanders have been causalities of war, fought mainly on foreign soils but in defense of what our two nations value most highly- independence, freedom and the democratic western way of life. Today I would like to focus on the Western Front where so many ANZAC lives were sacrificed.

Why the first world war happened still is difficult to explain but in retrospect it brought to a close the greatest period of European culture, led to the deaths of up to 10 million lives and scared forever the emotional lives of millions more.

Of course it was Paris that was the German objective and the progress through neutral Belgium that saw the Germans nearly thirty miles from Paris in just 35 days. The Belgium’s put up unexpected resistance and as the French fell back to defend Paris the British Expeditionary Force with the French were to join battle near the Marne River and holt the German advance.

It was the first battle of YPRES in October 1914. These were large battles involving thousands of troops on the move- Technology helped hold the line in the form of the humble Lee-Enfield rifle with its magazine that allowed the British to fire 15 rounds a minute verses the single shot Mauser rifles, so much so that the Germans mistook them for machine guns. In addition British servicemen received a daily marksman allowance for proven efficiency in shooting!

By the end of October the German Offensive had failed at enormous cost. An example was the German Volunteer Corp made up mainly by university students, many stopped by British rifle fire. Some 25,000 are buried in a mass grave in what became known as the Massacre of the Innocents at YPRES— A result that served to disabuse the German belief that the war would be short and glorious– instead attrition and mass death would become the norm with there being little hope of victory.

By the end of 1914 the allies had checked the German advance and the two sides had become entrenched. The next phase of trench warfare was to see not a great deal of change in the front line from 1915 to 1917.

By then things had bogged down such that General Haig commanding the British Expeditionary Force desperately attempted to break the German line in Flanders which saw the third battle of Ypres—commonly known by one word –Passchendaele. The battle of the mud as it became with the onset of rain is one of those pointless exercises which in the end led to yet another futile loss of life similar to the Somme and Verdun but this time involved troops from both Australia and New Zealand.

This was a war of attrition and despite initial success by the ANZACS the loss of life could hardly be justified. Some 38,000 Australians had been killed or wounded! And the offensive saw 245,000 British causalities with less than 8 Kilometers gained.

General John Monash, in his letters to his wife noted ‘our men are being put into the hottest fighting and are being sacrificed in hair brained ventures, like Bullecourt and Passchendaele, and there is no one in the war cabinet to lift a voice in protest”.

Military Historian John Keegan points out that all armies have a breaking point. By 1917 the French army had in essence had enough and while they held their lines by and large the soldiers were reluctant to engage in any new initiative. When the odds of survival have passed the dividing line between the possibility and the probability of death, a certain reluctance grips and reality induces a pause. Over 1,000,000 French deaths exceeded the strength of the army’s 135 divisions.

With the withdrawal of Russia in 1917 on the eastern Front some 50 German divisions were free to reinforce the effort on the western front in what was to become the “Spring Offensive”. Operation “Michael” on the western front saw an initial advance by the Germans so much so that the Kaiser, delighted with the results gave the school children a “Victory “holiday.

The German attacks however were checked, with the aid of the stiffening resolve of the ANZACS, at Villers- Bretoneaux in early April. Plans were then developed for a counter offensive. Here the ANZACS were to play a major role.

On the 31st May 1918, Monash took command of the Australian Corp and in his letters he describes his first divisional Commanders conference attended by all the Major Generals and their chiefs of staff. It is of historical significance, being a council of war held in the middle of a great campaign and close up to the front, where every member present was a native born Australian.

Technology and a marked change in tactics intervened as the allies launched a counter attack led by the Australian Corp, with the New Zealanders, the British Tank Corp and for the first time soldiers of the USA also under Monash’s command.

Tanks had emerged as a tool of warfare, an initiative of Churchill and called a tank to disguise its nature-the factory let it be known they were constructing water tanks! These were capable of travelling over the rough terrain, of cutting through the barbed wire defenses and sheltering the troops as they advanced.
Monash abhorred the needless loss of life and saw in the Tank a way forward in battle that would offer protection. The Germans had missed the boat in the development of the Tank.

The battle of Hamel, 4th July 1918 after meticulous planning by the engineer Monash, saw a coordinated combined –arms operation that included smoke and gas diversions, creeping artillery, 50 Mark V assault tanks , 5 resupply tanks followed closely by the infantry and the use of aircraft. The first ever resupply by air drops occurred using an Australian invented parachute.

The “combined arms” approach was a transition from the massed attacks that characterized the battles of 1914 and the intervening trench warfare.
For two weeks shelling accompanied by smoke and gas was unleashed on the enemy but on the day of the attack no gas was used however gas masks were donned by the Germans in anticipation restricting their vision.

Most commanders till then could not see what was going on during the battle so Monash endeavored to keep informed using Radio for the first time, also phone links carried forward and aerial observation with messages dropped to motor cyclists updating the fronts as the men advanced.
To help with communication he insisted the tank crews lived with the troops they were assigned in the lead up to battle and each tank carried insignia of the troops so a mutual understanding would develop. The attack took 93 minuites-3 more than Monash had calculated.

The next day the German high command decided to abandon the attack on Amiens…’“the enemy resistance was beyond our powers”. The French Prime Minister Clemenceau visited and congratulated the Australians making a firey speech in’ very good English’, said Monash.

The significance of Hamel lies not so much in territory gained or the size of the victory but in the fact it showed a new way to fight a battle. It represents a turning point, a method of approach using the concept of “combined arms” that could bring an end to the war.

This battle carried another special significance as it was the start of the Australian USA military alliance that has seen us fighting side by side in every major conflict through WW2, Korea, Vietnam, the Gulf war, Afghanistan and Iraq and elsewhere. Human life is the greatest causality in war but human spirit possibly the greatest survivor.

From Gallipoli to the western front and beyond, in the darkest hours on the battle front, in trenches, in the mud and dugouts men were cast into mutual dependency and sacrifice, developing deep bonds between strangers and colleagues as they were thrown together.

Mateship developed stronger than any friendship made in peace time, life and death blood ties, a mutual understanding that required few words.
Experiences not talked about but which underpinned an understanding that would help support the lucky survivors.

A special silence developed about their experiences and it is not uncommon even today to hear people say ‘dad never talked about the war”.

Well there is little more to be said today about this great tragedy but our thoughts should go out to the missed opportunities of all those who died , of the thousands of wounded, the widows and the large number of young women forever deprived of the chance to marry and the many children deprived of a father.