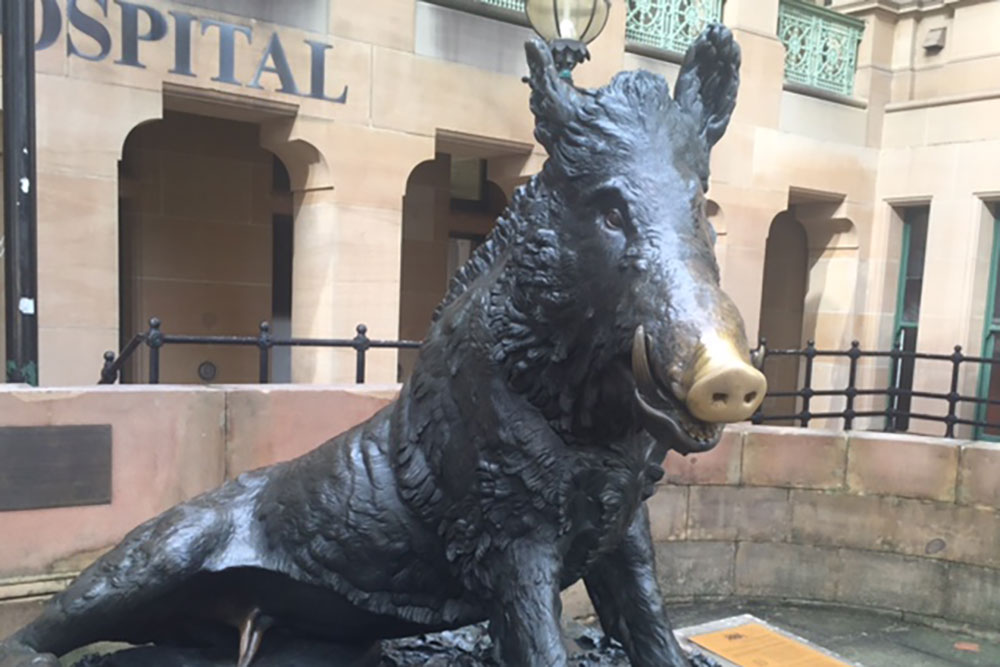 With ANZAC day commemorations approaching, it occurred to me that there was one outstanding vigneron and wine maker who was also a distinguished surgeon. He was present during the Gallipoli campaign commanding the 3rd Australian General Hospital at Lemnos, the Greek Island that became the base for medical support for the wounded Anzacs.

Born in Florence, Italy, of an English mother and Florentine Professor of Mathematics father, he studied medicine in Florence and Pisa coming to Australia in 1874 to the Queensland gold fields and subsequently was a house surgeon at St. Vincent’s in Sydney before returning to Italy to complete his degrees . He and his wife Catherine Reynolds, whom he met at St. Vincent’s, returned to Australia and he developed his surgical practice at Windsor.

He was keen on growing grapes and introduced Italian wines to his Hawkesbury vineyard which he named Tizzana, importing skilled Italian vinedressers to help out. He was probably the first to produce a Chianti style wine reflecting his Florentine background. He also established St. Augustine vineyard in Mudgee. By 1889 he was producing some 9000 Gallons of wine, and took out the first three places at the Melbourne Centennial Exhibition. He shipped his wine by sea from the Hawkesbury to Sydney where he opened a wine bar and sold directly to the public.

Fiaschi believed in the medicinal properties of wine and wrote a paper on the “Various wines used in Sickness and Convalescence” in which he considered “the temperate use of wine a valuable support to healthy man in this thorny path of life” a thought many of us would agree with.

In 1891 he was appointed Honorary Captain surgeon to the NSW Lancers. He is said to have played a part in the design of their uniform including the addition of the Black Cockerel feathers to their slouch hats- The black cockerel being the symbol of Chianti!

Fiaschi sought leave from the Lancers to join the Italian Army Medical Services in their Abyssinian (Ethiopian) campaign, wearing the distinctive uniform of the NSW Lancers complete with Feather Plume and double red stripes on his breaches while there.

This was his first experience as a war surgeon and he wrote about the poor treatment of Italian prisoners in the British Medical Journal. His distinguished surgical work resulted in the award of Knight of the order of St. Maurice and St. Lazarus and Commander of the Order of the Crown of Italy from King Umberto.

His return to Australia followed a visit to the USA where he studied advances in Listerian aseptic surgery, an area of interest he had already engaged with. The military call next saw him in command of the NSW 1st Field Hospital in support of the British during the Boar war in 1899. This was just prior to Federation and NSW sent six medical officers including Neville Howse, a surgeon from Orange who won the Victoria cross, and also my wife Mary’ great Grandfather Dr. AE Perkins who was awarded the DSO.

Fiaschi had the unique distinction of being one of the few Medical Officers to ever take prisoners! In February 1900 he led four stretcher squads into the trenchers looking for the wounded after an engagement with Canadian infantry, when he saw some armed Boar soldiers and at the same time the Boars saw his men jumping into the trenches. “Lay down your arms and come out” he shouted, the white flag was raised and to their surprise some 250 disheveled men threw down their Mauser rifles and were taken prisoner! The stretchers were then used to carry numerous wounded left behind, to the field hospital where the surgeons worked through the night. For conspicuous bravery and devotion to duty he was awarded the DSO and mentioned twice in dispatches.

Many of the Boar war veterans were called upon in WW1 and Fiaschi found himself commanding the 3rd Australian General Hospital on Lemnos. The hospital was set up in August in time to receive the wounded from the “August Offensive” during which thousands were arriving at the various hospitals on the Island. The weather was bitterly cold, with high wind and rain-the medical staff and wounded were nearly frozen under the severe conditions. Fiaschi took the lead from the King and abstained from drinking wine- a mistake in retrospect as he said to his physician Sir William Osler. The availability of fruit and vegetables was almost nonexistent and he developed Beri Beri (a thiamin deficiency commonly seen in POW’s surviving the Burma Railway) necessitating his evacuation to London.

After recovering from BeriBeri on his way back to Australia he resigned his commission allowing him to serve as a surgeon with the Italian Army in a Red Cross military hospital at Schio on the Terintino where the Austrians were advancing. Returning to Australia in October 1917, he joined the Army Medical Corp Reserve and retired in 1921 as Honorary Brigadier General.

A man of much energy he was passionate about the soil and Viticulture. He worked hard to develop the wine industry in Australia and was President of the Australian Wine Producers Association from 1902-1927 and a councilor of the Royal Agricultural Society. He also founded the Dante Alighieri Art and Literary Society in Australia.

Il Porcellino – the bronze statue replicia of the wild boar that sits outside the Markets in Florence, can be seen in Macquarie Street Sydney, outside Sydney Hospital, is a memorial to Dr Thomas Fiaschi and his son, another distinguished surgeon/ soldier Pietro Fiaschi. It was donated by his daughter Clarissa, The Marchesa Fiaschi Torrigiani of Florence, Italy, in memory of her Father and Brother.

J S Pardy DSO who commanded the 3rd Australian General Hospital at Abberville on the western front, in writing about Thomas Fiaschi noted the name and spirit of Fiaschi inspired the unit long after its first CO had been evacuated with BeriBeri. ‘To have excelled in three roles, however so diverse as those of a soldier, a surgeon and a vigneron was indeed a unique achievement”.

“Happy is the country which has no history. Unhappy indeed is that country which, having a history, however short, fails to record it”, said Pardy. In Thomas Fiaschi we have an example of all that is good in our migrant society, in times of war he was equally prepared to die for his country of adoption as he was for the country of his birth. In times of peace he was a contributor to his profession, to agriculture and the arts- what more can a man do.