Spring in the vineyard time to start making wine! 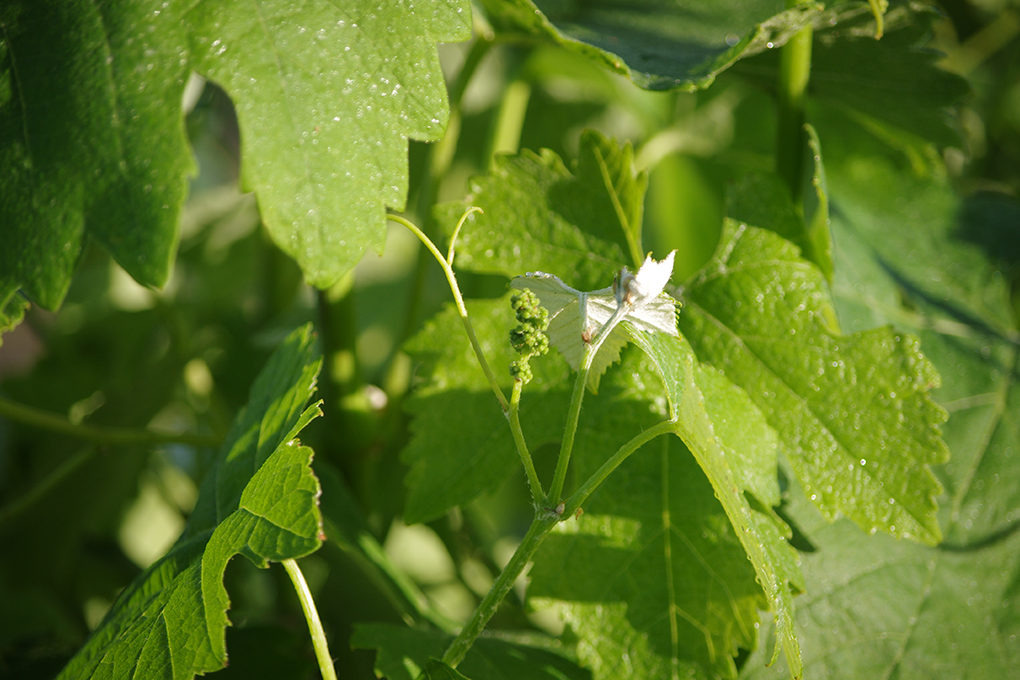 ‘Good wine starts in the vineyard’ is a familiar quote and certainly holds true when it comes to quality, but what does it mean. We were recently asked to make a short video for the Around Hermitage News Desk about spring in the vineyard and there were many facets that came to mind that we often take for granted but having to explain what we do brings into focus what it is that works well in our vineyard.
In fact, we start preparing for this year immediately after harvest when we water and fertilise the vines in order that they keep their leaves as long as possible and thus build up energy in preparation for the next spring. Winter pruning aims at setting just the right number of buds for the spring.
In the Hunter the mid to late winter can be quite dry so we make sure the soil moisture level is adequate to support the budburst, often running the drip irrigation on several occasions—we don’t want to play catch up as the buds appear. We have an active spray programme to prevent Downey and Powdery mildew as well as Botrytis infection which starts as the shoots develop.
You can always get a good discussion going as to which way to prune and what kind of trellising leads to the best quality grapes. We recognize the answer is very much tied up with the individual vineyard, its soil type and aspect.
In recent years the influence of Richard Smart and his publication “Sunlight into wine” has been seen in the style of trellising that is used worldwide. When we planted at Tintilla we had Richard Smart as a consultant and for us, he recommended “Smart Dyson ballerina” as the way to go. This is a form of vertical shoot positioning (VSP) that allows some overhang of shoots to prevent sunburn of the grapes in our Hunter summers whilst letting dappled light into the canopy to enhance the colouring of the red grapes in particular. A system of four wires is used to lift the shoots upwards, a process done in stages as the shoots grow.
It is the buildup of chemicals in the skins-the phenolics- that occurs when exposed to sunlight that adds to the flavour and quality of the wine- a bit like a suntan!. Another interesting aspect of being in the Hunter is the influence of Summer Rainfall. Smart points out those wine regions such as Bordeaux and Tuscany, that also are summer rainfall challenged areas, produce better quality wines as the vines respond to the weather by producing more phenolics as an inbuilt protection to the disease threat that comes with the rain.
The irrigation areas and places such as California where there is no such challenge produce fewer phenolics unless managed with trellising to enhance the flavonoids and even then they are behind the eight ball.
Those men of the enlightenment that formed the Hunter River Vineyard Association(HRVA) back in 1847 were curious as to how best to prune and trellis the vines.
Initially staking the vines was the common approach but variations on how to do it were discussed at the HRVA meetings. Reading James Busby’s account of the plantings in Burgundy, it seems that a very disordered approach involving regeneration through layering was the order of the day, not neat rows of trellising as seen today. Travelling through the vineyards of France, Italy and California again a variety of approaches can be seen but, today exposure to sunlight and aeration around the vines are the key principles that determine which approach to take.
One advantage of the VSP system is to allow the air to circulate under the vines, this helps dry them out after rainfall and can act as a mechanical means of protecting the vines. The lifting of the shoots also enables a more efficient means of spraying the leaves and grapes to protect from fungal diseases.
Traditional Hunter trellis with large amount of overhang
Our pioneers in the Hunter wine industry recognized the need for experienced vinedressers to enable the industry to grow. The lack of a vine culture was evident, yet they were prepared to experiment and exchange ideas as the industry grew. Non-Empire immigrants were prohibited so it took a lot of effort to change the laws and enable recruitment of qualified and experienced vinedressers.
As Dr Carmichael reflected the HRVA should put on record the benefits reaped from the German dressers. I often wondered why these families would travel so far to join a virgin industry, the timing was important. The European Potato fathom of the late 1840’s went far beyond Ireland and it was the threat of starvation among other things that motivated these families to come, as it did a large number of people from the British Isles, a fact that benefited the colony as a whole.
As you drive through the Hunter Valley and see the neat rows of vines reaching up to the sun, it is worth reflecting on the science, the experimentation, the backbreaking work that has gone into developing a means of producing healthy, flavoursome wines. Wines that are worth enjoying every drop.
#aroundhermitage #huntervalley #bobsblog
Author: Robert Lusby AM
©Around Hermitage Association Inc.
SHARE THIS POST
Share on FacebookShare on Facebook TweetShare on Twitter Pin itShare on Pinterest Share on WhatsAppShare on WhatsApp
LIKE US ON FACEBOOK