The evolution of the wine bottle 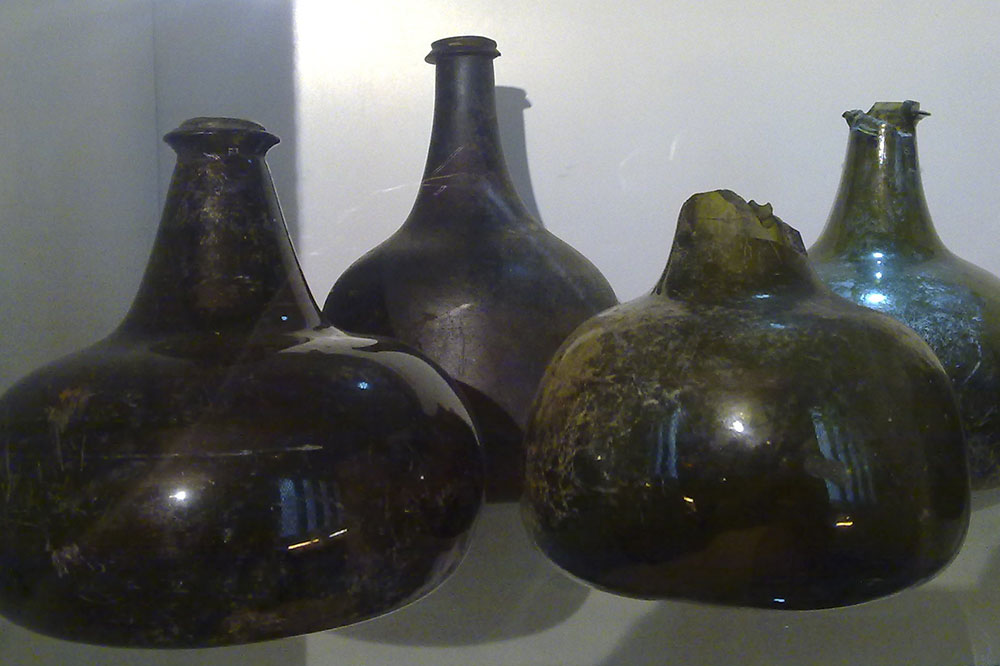 We have a lot to thank the Portuguese for, apart from the early discovery of Australia. In 1727 the association of Port Shippers was foundered producing an export wine with a dash of brandy added for the English market. It was thought the brandy helped the wine to travel and the English palate warmed to the addition which often overcame issues with the wine.

It was a hit and miss affair at first with wine makers not really understanding the process. This “Port” was in its infancy and not till 1756 did the situation normalise with the Oporto Wine Company founded under Royal Charter. The wine growing zone was marked out and only wines of high quality were exported although there was a market for lesser quality wines! The use of a saccharometer to measure the sweetness and timing for the addition of brandy greatly enhanced the quality of the fortified wine.

The young wines mixed with young brandy were almost impossible to drink and required extended time in wood to mature and for the contents to amalgamate.

The evolution of the bottle was integral to the development of port and indeed not long after this time it was recognised that still wines would also improve with ageing in bottle.

The future of all great wines was soon linked to the function of bottle ageing and maturation. The Romans had appreciated the benefits of ageing in sealed amphora. Falernum was regarded as the best Roman wine, a white wine that was aged 10-20 years until it was amber-coloured!

However during the dark ages the understanding of wine maturation was lost. Most wine was consumed straight from the barrel, within a year of production and glass bottles of varying shapes used only to serve the wine. Indeed the free-blown onion shaped bottles contained varying volumes and had irregular shapes of the neck such that the lack of a good seal meant glass was not considered for ageing. In 1638 an Act of Parliament in England, forbad the use of wine bottles as the volume could not be measured and controlled. Governments always interfere with drinking pleasure…think of all those pewter mugs with government standard marks measuring the volume just to remind you of who controls your drinking.

With the development of longer and more regular necks, the invention of the cork screw and use of cork to seal the bottle things changed.

The development of the cork screw was not an easy matter but key to the everyday use of the bottle. There have been numerous inventions aimed at extracting the corks since the mid-18th century. Corks vary in length, diameter and tension and of course with bottle ageing there is a tendency for the lower ends to soften and break on attempted extraction. Thank goodness for the screw cap that saves all the hassle now.

Still remaining was the need for a bottle that could lie on its side with moisture in contact with the cork to stop it drying out, shrinking and allowing air in that would spoil the wine.

In the second half of the 18th century the bulbous, squat Port bottle gradually was replaced by a more cylindrical body that could lie on its side and be stored in large numbers.

The invention of the Port wine bottle some would say marks the beginning of the modern era of wine. Chateau Lafite is said to be one of the first to recognise the improvement of its wine through bottle ageing.

While most wine is consumed within hours of purchase it is still necessary for even the most commercial wines to have some time in bottle to recover from the ‘shock’ of bottling. Fine wines are made to age in bottle allowing the phenolics, acids, alcohol and residual sugars to integrate and develop into the complex bouquets and flavours of mature wines.

Wine bottles often reflected the origin of the wines Port, Sherry, and Bordeaux varieties have straight-sided and high-shouldered with a pronounced punt. Burgundy and Rhone have sloping shoulders and a smaller punt while the wines of Alsace have no punt at all. So what is the punt?

One aspect of the wine bottle was the formation of a dimple or PUNT at the bottom. This was a result of the early method of free blown bottles made with a blowpipe and pontil. By indenting the point at the bottom where the glass pontil was detached, the scar formed was pushed in and thus avoiding scratching the table and making the bottle more stable.

It also helps to gather the sediment as the wine ages facilitating pouring of a sediment free wine. The sediment is made up of tannins and tartaric acid crystals that drop out of the wine over time resulting in softening and also some change in colour. The stronger Port and Bordeaux wines requiring a deeper punt. Australian Shiraz is often bottled in a Bordeaux style bottle but the softer Hunter Shiraz may be found in a “Burgundy” style bottle.

Interestingly marketing research in the UK has revealed the depth of the punt to be proportional to the cost of the wine! But don’t go out and purchase on this account…many average wines can be dressed up in heavy bottles with long necks and deep punts, all part of the marketing departments contribution. As always enjoyment comes from knowing the story behind the wine, tasting the wine and if possible sampling the wine as it ages in the bottle.