The origin of sparkling wine in the Hunter 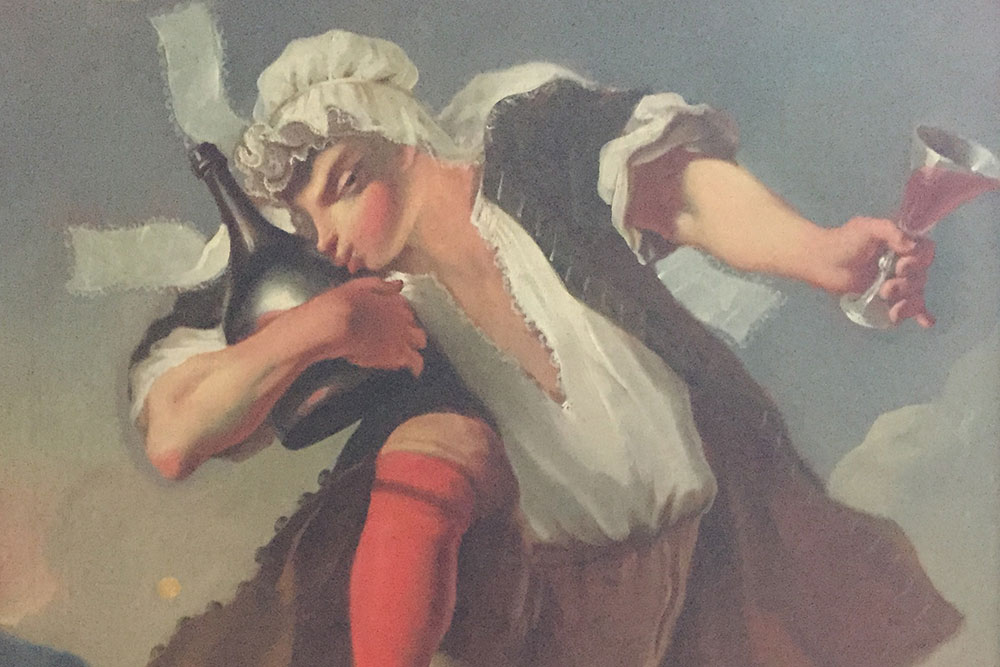 Sparkling Tintilla Blush with some Granita Syrup from the Two Fat Blokes and a day in the freezer made the welcoming Cocktail at our end of Harvest Hawaiian night. We have a long tradition of making sparkling wines in the Hunter, starting with the experiments of James King of Illawang. In 1850 he was awarded the Horticultural Society of Sydney’s Gold medal for his “light sparkling “ from the 1844 vintage.

More significantly he was invited to have his sparkling wine on the table of Emperor Napoleon III at the closing ceremony of the famous Paris Exhibition of 1855. The Paris jury reported the wine had “a bouquet, body and flavor equal to the finest champagnes”. Interestingly the muselet (wire basket) used to prevent the cork blowing out of a champagne bottle was not invented till 1844 by Aldolphe Jaqueson and the rise of champagne as a popular wine style was a 19th century phenomenon. So in a sense we are quite contemporary with the development of sparkling wine due to Kings endeavors.

As a Scotsman with no viticultural experience, he from the outset in 1832, had experimented and tried to discover the best methods of planting, training and pruning his vines, he sought the most suitable soils and selected those vines that seemed to thrive in the Hunter environment. He “selected vines that bore abundantly every year and brought their fruit to the greatest perfection” He also developed skills in wine making and blending as well as “mellowing” or ageing his wines. The Semillon grape did well in his hands and also the Pinot Noir!

It is said he spared no pains to obtain high quality- limiting his cropping levels to two thousand gallons from about five acres of grapes as he felt larger crops would produce inferior wines. He was typical of many early settlers, full of enthusiasm and energy, not afraid to take on new ideas and happy to share his experiences. He wrote numerous pamphlets and books including “Australia may be an Extensive Wine-growing Country” published in Edinburgh 1857.

Recognizing that they had little experience in growing and producing wine the early pioneers formed the Hunter River Vineyard Association in 1847 as a means of exchanging ideas and experiences. James King was a driving force behind the HRVA which insisted every member be a “cultivator of the vine and bona fide maker of wine” and that “members are to communicate any knowledge on viticulture by letter to the secretary”.

At their half yearly meetings “Each member is to give 8 bottles of wine or more of his vineyard, to be packed in a box with locks and hinges, key to be given to the secretary with a statement of the vineyard, age of vine, variety, implements used, age of wine and quality” Reading this makes me feel good that the wine tasting groups I belong to are not so demanding but the tradition of comparative tastings remains central to driving quality I believe.

The HRVA meetings were held at the Northumberland Hotel, West Maitland, and the proceedings published in the Maitland Mercury. I have googled the Mercury and sifted through many editions to glean information and a feel for those early days…worth a try on a rainy day.

An insight in how King developed his wine making skills can be obtained from his controversial Wine Report of 1851 where he recalls a visit to the Hunter by wine maker William Macarthur of Camden, son of John of wool making fame, in 1847.

King in his scientific self taught approach sought advice from one of the most outstanding scientists of the day- the German chemist Baron Justus Von Liebig. Von Liebig had discovered nitrogen as an essential nutrient of crops, developed a means of preserving beef extract (Oxo cubes) and a way of preserving milk (Liebig’s Soluble food for Babies) a milk formula that did away with wet nurses and saved tens of thousands of lives from TB.

King sent specimens of his wines for analysis by von Liebig , he translated von Liebigs letters on fertilizing or manuring vines for all to appreciate. Von Leibig was surprised to find grapes could be grown in the colony but happy to correspond with King and give his very expert advice. Later King went to Munich to meet von Liebig and went on to meet the Duke of Nassau who said the Hunter red wine were the equal of the famed Assmanshausen wines and the whites similar to the best white wines but a little firmer(riper—as is still the case).

In a candid conversation he told Macarthur that he felt Macarthur’s Treatise on the Vine “(in all respects a valuble work)” did not attach sufficient importance to heat or temperature in influencing the process of wine making. Macarthur confided he had trouble at times fermenting the Verdeilha grape where the fermentation would cease while the wine was still sweet and subsequently the wine turned to vinegar. King told him he considered the problem to be a deficiency of leaven (yeast) in the presence of an over abundance of sugar. King’s solution was to add fermenting juice from another vat to kick along the ferment. At the time little was known about stuck ferments, he had discussed it with von Liebig but virtually nothing had been published according to King, so his solution was unique at the time and new to Macarthur. King also suggested the sugar level could be measured by “a simple little instrument the saccharometer” which he had used for years!

So King was very disappointed when at the First regular meeting of the new NSW Vineyard Association Macarthur discussed this solution in his presidential address without acknowledging that he gained the knowledge regarding stuck ferments while visiting the Hunter District. I mentioned this was a controversial report as other members of the HRVA did not think it proper to criticize Macarthur, and it was suggested future reports stick to facts!

King and Macarthur subsequently resolved their differences and it was Macarthur as NSW Commissioner who took Kings sparkling wine as well as his own to the 1855 Paris Exhibition, both being awarded medals and presented to the Emperor. This was the exhibition at which the Grand Classification of Bordeaux wine was established.

William Macarthur was knighted and made an officer of the Legion of Honour for his services at the close of the exhibition. King unfortunately fell sick the next year and finally made his way back to Edinburgh where he died in 1857. He maintained his correspondence with von Liebig till he died. Sadly his sparkling wine making efforts were lost on us after his death having reached such a high standard by the time of the Paris exhibition.

The James King of Illawang International Travelling Scholarship of the University of Sydney commemorates this remarkable man.