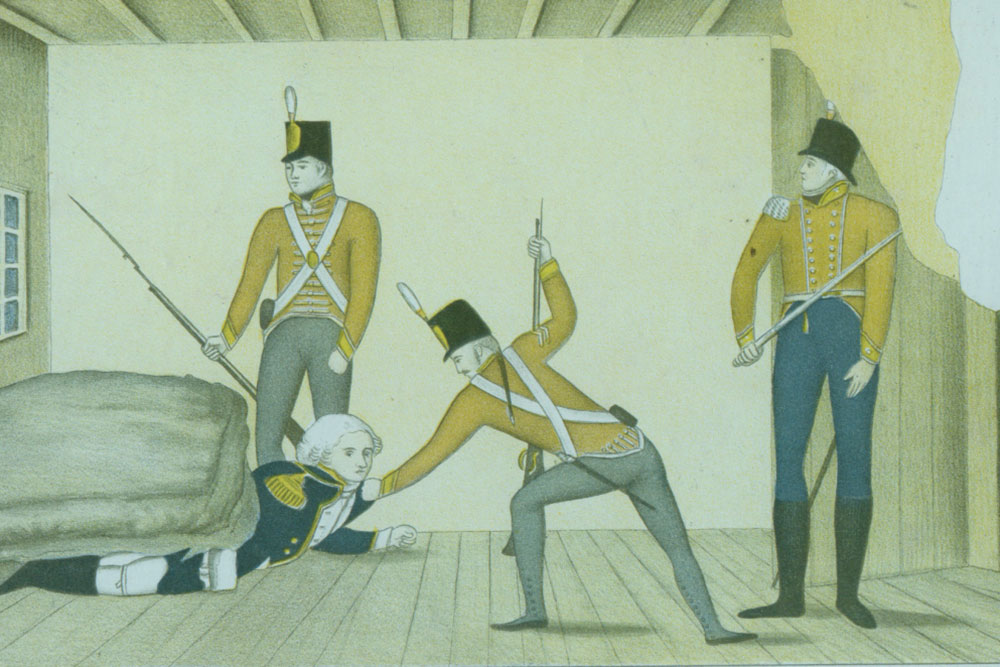 We recently visited the very successful Hunter Distillery on Broke Road as part of an Around Hermitage Famil. It got me thinking about the role distillation has had in our history.

The First Fleet’s arrival in Botany Bay on 26 January 1788 is not the only important event that has occurred on 26 January. In 1808 The “Rum Rebellion” took place. The local garrison, the 113 NSW regiment marched with fixed bayonets to the governor’s house and arrested Governor William Bligh—a momentous occasion in our young colony.

Interestingly this was not called the Rum Rebellion at the time, it was really about the desire of free and freed settlers to break away from the oppression of a limited, government dependent economy and the restrictive autocracy headed by the governor.

Rum really didn’t enter the equation until 1855 when an English Teetotaler wrote a history of Australia and keen to espouse the evil of alcohol invented the term “Rum rebellion” to explain the arrest of Bligh.

Nonetheless the attempt by John Macarthur to import two stills was one of the precipitating factors. One of the byproducts of a vineyard was surplus wine for distillation and Macarthur could see the obvious possibilities. Bligh had forbidden the importation of stills, however Macarthur arranged for the stills to be disassembled into two copper boilers and “other Parts” that could be reassembled locally. It was the confiscation of the copper boilers for resale overseas that brought matters to a head.

In court Macarthur said “it would appear that a British subject, living in a British settlement, in which British laws are established by Royal Patent, has had his property wrestled away from him”. What followed was a spat between the two including an issue over the vessel Parramatta owned by Macarthur, resulting in Macarthur being charged with sedition. He was subsequently found not guilty following proceedings later in London. Interestingly during this time he travelled to Europe where he and his son collected cuttings of grape vines while in France to bring back to their vineyard in Camden.

From the early days of colonial vineyards Brandy was seen as part and parcel of the viticultural endeavors. Dr. Carmichael one of the early pioneers and founders of the Hunter River Vineyard Association had a still on his Porphery vineyard in the 1840’s.

As an example of production can be seen in the first records of vineyards that were made in 1844, for the year 1843, the Hunter had 262 acres of a total of a NSW total of 508 acres The acres produced in that year 16,472 gallons of wine and 140 gallons of brandy.

We are all aware of the famous Hunter Valley Distillery (HVD) block on Hermitage Road, now part of Tyrrell’s history and the origins of Australian Chardonnay. The distillery itself was built near the Allandale rail underpass. The Hunter Valley Distillery Company was formed in 1903 when the demand for spirits was high. The distillery was designed to take excess grapes for distillation into fortifying spirits for the manufacture of fortified wines. Penfolds leased it in 1933 and bought it in 1948 they later sold the vineyard to Tyrrell’s in 1982.

The Chardonnay was planted about 1908 under the supervision of an interesting Frenchman, Alex Combet, an assistant alter wine maker and former trainee priest and his wife, a former nun, Marie Antoinette. They left France to marry in Maitland in 1902 and settle in the Hunter Valley. His grandson is Greg Combet, former government minister.

The fruit planted included Semillon, clairette and trebbiano as well as chardonnay, probably from cuttings locally available. Apart from Trebbiano traditional brandy grapes such as Folle Blanche and Colombard were not included. The Chardonnay had come to the Hunter via the Busby vines planted at Kirkton. Busby called it Pineau Blanc or CHAUDENEY and commented that it is the “only variety of white grape cultivated in the best vineyards”, no doubt with white wine in mind.

It was an interesting time post Federation when trade barriers were lifted. The influx of cheaper wines from South Australia and Victoria had a devastating effect leaving many Hunter growers with surplus fruit which was taken up by the distillery, enabling some vineyards to survive the financial crises.
Many of us remember Linderman’s Still room, it was always a feature of its Ben Ean cellar door and another reminder of that aspect of the wine industry and our links to the past which is somewhat forgotten today.

Many of the pioneers of the wine industry in the Hunter sought to promote wine as an alternative to hard liquor so little wonder not much attention was paid to promoting Brandy here. In the early days wine for export was fortified with brandy in the belief it helped it travel! Our reputation has always been based on bottled table wines, more so than elsewhere in Australia, and long may it be so.